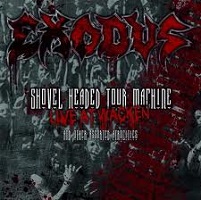 Not the slightest bit surprised this was an entertaining

, multiple watch worthy visual – Gary Holt and co. haven’t slipped up since they came back in 2004 and they don’t appear to be ready to start. As the first real Exodus DVD, Shovel Head Tour Machine – Live At Wacken (And Other Assorted Atrocities) captures the band onstage at Wacken (duh) and in a separate 90-minute behind the scenes documentary

which pretty much makes this thing a mandatory buy. Funny guys, these Exodus dudes.

performance at the legendary German festival, it’s pro-shot. Limited to just 11 songs, Exodus does do a nice job of mixing old classics (“Bonded By Blood,” “Piranha,” and “Strike of the Beast”) with some of the newer material (“Iconoclasm,” “Funeral Hymn,” “Blacklist” and “War Is My Shepherd”). Special nods to vocalist Rob Dukes, who has emerged as a strikingly imposing, yet affable frontman. Metal needs more people like him.

As for disc three, various footage from the band’s tours in support of 2005’sShovel Headed Kill Machine and 2007’s Atrocity Exhibition – Exhibit A were compiled into an action-packed, comedic romp that is difficult not to enjoy. Of the various and odds and sods included, each member of the band is profiled, memories of deceased ex-singer Paul Ballof are tossed about, practical jokes are a plenty, a few “Exodus Non-Metal Moments” get airtime, as well as loads of onstage footage and chicanery.

As comprehensive of a DVD

as they come, Shovel Head Tour Machine – Live At Wacken (And Other Assorted Atrocities) is another notch in post-reunion belt for Exodus. Even if you’re not a fan (and frankly, why one wouldn’t be would be myth), this is good for some laughs, thrash, and good friendly violent fun.