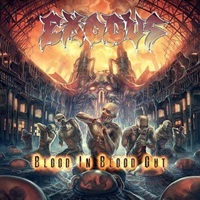 You may need a scorecard to keep up with the changes in a lot of your favorite veteran metal bands. Take Bay Area thrash warriors Exodus for instance. In the past two years alone, guitarist Gary Holt has been performing double duty, taking over the vacant Slayer guitar slot due to the untimely passing of Jeff Hanneman, long-time singer Rob Dukes was let go and for the third time (hopefully it’s the charm) Steve ‘Zetro’ Souza returns to the mic stand. So for their tenth studio album Blood In, Blood Out, expectations are ever-present that the band will produce the thrash album of the year, keeping the young guns on their toes, and like Anthrax, Overkill, and Testament before them, flexing their creative muscles for current landmark records.

Recording over a five month period at Studio D for drummer Tom Hunting’s parts and Tom’s jam room for all other instrument/singing duties gives Exodus a comfortable luxury time-wise to refine, re-listen, and hone in again to make the riffs explode, the tempos gallop and speed away, and Zetro patented sneer and battering word ram approach galvanize the troops. It takes two minutes plus for the instrumental set up of “Black 13” before the regular lyrics kick in, but the militant buzz and drumming gives way to the Holt/Altus buzz saw picking and swarming thrash mastery – while Mr. Souza roars in his calling card delivery, the larynx and lungs still vital and outpacing gentlemen half his age.

The follow up title cut at 3:42 has a certain punk-like appeal, the gang vocals battling against the regular words as this song has the primal energy that Holt is probably bringing back to the Exodus table from his years now performing live with the one of ‘Big Four’ American originators, while the instrumental section contains a nifty guitar harmony refrain. Throughout this 11 song, 62 minute plus record feelings come up of the band fusing the best elements of their career that make albums like Fabulous Disaster or Tempo of the Damned resonate even today – be it the rhythmic pummeling for “Collateral Damage”, the Jack Gibson bass thump against a bevy of crisp, mid-tempo riffs for “BTK” or the all-out speed mania that makes “Honor Killings” a prime set list candidate (you can hear teens screaming ‘Salvation’ and ‘Decapitated’ from car stereos everywhere).

Everything you can expect in a thrash record is here: aggression, speed, viciousness, excitement, and attention to the all-mighty catalog of riffs – as well as that occasional dynamic tempo shift to cause body movement and the silly ear-hairs to stand on edge. Blood In, Blood Out proves Exodus belong in the elite thrash category, and everyone should look forward to how these songs slice and dice audiences on tour. Nothing against the Rob Dukes years, as there were quite a few gems on those records, but for my money, there’s something so sweet about Zetro fronting Exodus once again. Safe to say Exodus comes back swinging haymakers and connecting every time on this molten platter.