Exmortus – Slave to the Sword (Prosthetic) 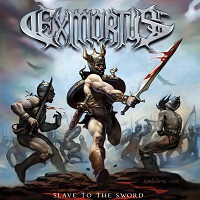 Being familiar with the metal scene for over 30+ years, you see developing trends and acts who could make a lasting impact. Gone are the days where everything needs to be eviler or more extreme, where people shed the old-school to gain underground respect. I’ve always been a fan who can dig Morbid Angel and Suffocation one day, then Iron Maiden and Accept the next, so for my ears I’m elated when I receive an album such as Slave to the Sword from California’s Exmortus.

You see, the quartet perform in a neo-classical meets technical thrash/death style, never forsaking the roots of traditional metal in terms of hooks, songwriting, and attention to detail. For many the straddling of genres could cause headaches, but rest assured the band on this third album deliver a potent musical cocktail that should have serve as a textbook for air guitar competitions or tab notation for skill development. The tandem of Conan and David Rivera on guitars lead the band on this valiant charge with their dual shred syncopation, thrusting and volleying through the thrash and death landscape but with an updated spirit that takes the work of Andy LaRocque, Helstar, Downing/Tipton, or Murray/Smith into the 21st century.

From the opening neo-classical dual runs in “Rising” to the anthem closer “Metal Is King,” Exmortus push the harmonies, the unity, the galloping riffing and the aggression that makes heavy metal so exciting. Drummer Mario Moreno accents the axe action with the right fill work, changing tempos on a dime. I hear parts of “Nice Dreams”-era Powermad in the opening strains of “Warrior of the Night,” while Beethoven gets a metal makeover in “Moonlight Sonata (Act 3)” – Yngwie would be proud of Exmortus’ attention to detail and this should be a killer when the band tours the globe.

Ten songs in 51 minutes that prove Exmortus is in this game for the long haul. This should inspire many to dig deeper into all genres of metal – possibly a kindred spirit to Boston’s Revocation, just with more of that axe flash and dash that made Painkiller so classic in 1990 and stand up today.