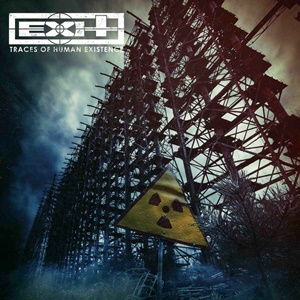 Originally together from the mid-90’s, Swiss unit Exit started in a death metal template for their first couple of releases – moving by the III record in 2009 into more of a groove/modern thrash/ metalcore direction. Traces of Human Existence is their fifth studio album and first in four years for the band, delivering nine tracks of aggression that incorporate a mixture of influences not just from their European roots, but also a bit on the US angle to create an explosive and interesting dynamic style.

Song to song you can hear the band go from simple groove-like rhythms to blast beat, melodic death metal-oriented sections – or sometimes melding the two elements together as evident right away on opener “The Power That Hates the Greed”. Slower, thumping bass against energetic runs and solid thrash/power mechanics from drummer Andyman makes “None of Your Business” a front half highlight, as guitarist Beni ‘the Animal’ Sax barks out his menacing vocals like a possessed Burton C. Bell from Fear Factory or Leif from Dew-Scented. Musically the band intertwine frantic riffs against mid-tempo, controlled groove passages – as if tempering their extreme nuances a la At The Gates or Krisiun with a sound that can create swirling pits or unison headbanging, with “Only Pain Is Real” and “Miserable Life” winners of the record. An open snare tone propels the swing factor, while the chunky guitar rhythms and switch-ups keep the listener on their toes during the transitions. The cleaner guitar action against some free flow jazzy percussion movements sets “Empire” apart, even as the song kicks into regular thrash/death movements – the pacing and atmosphere perfect for those who love a metalcore breakdown that isn’t dumbed down, and the occasional use of clean vocal melodies make sense.

Those who love the raw, in your face sound of say late 80’s thrash with the speed and ferocity of death metal balanced with groove-oriented, mid-tempo hooks at times will find Traces of Human Existence most appealing. Potential is present, it’s just difficult to pinpoint sometimes where the cross-pollination of influences tends to go for a cohesive direction in the case of Exit.