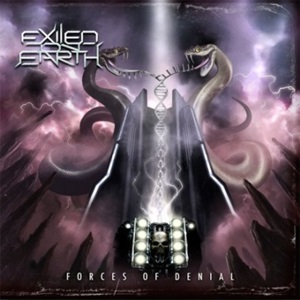 Technical metal and its power/progressive/thrash offshoots may not be in vogue like it was a couple of decades ago when Coroner, Realm, Toxik and Watchtower awed audiences – but their influence has spread far and wide to the current generation of metal musicians. Italian act Exiled On Earth profess an affinity for advanced riffing, crisp time signature changes, and stellar musicianship all around on their second full-length Forces of Denial. It’s obvious that having a career spanning 16 years together hasn’t gone to waste, as these guys are serious about pulling off amazing metal beyond the norm.

Sound clips from Richard M. Nixon during his presidential candidacy run of the 1960’s filter into the instrumental section of “The Glory and the Lie”, while ambient, clean guitar nuances give chase to a killer dual guitar/bass progressive thrash barrage during the follow up “Hypnotic Persecutions”. Bassist Gino Palombi doesn’t relegate his bottom end duties to the background – check out some of his sick Cynic/Atheist-oriented free flowing finger dexterity on “Vortex of Deception” or the gallop-ish “Into the Serpent’s Nest”, opening up a lot of power play offs next to the drumming that elevate aural interest on subsequent listens. Guitarists Alfredo Gargaro and Tiziano Marcozzi race up and down their fretboards while also captivating through smart hooks and exhilarating lead breaks – students of everything from Bay Area thrash and Jeff Waters to a lot of their own European heroes right away on the progressive opening title cut and shape shift swinging “Underground Intelligence” (the slower, methodical lead work especially a surprise twist).

Tiziano handles the vocals for Exiled on Earth – and although slightly accented, he has a melodic meets aggressive nature depending on the needs of the song that makes the material much more palatable for those who desire cleaner, mid-range to slightly higher power delivery with their technical metal arrangements. In the end, you’ll get 8 songs of impressive musicianship delivered in tight 4-5 minute windows, making Forces of Denial a great album to delve into on multiple levels for a longer period of time. Plus, it beats listening to another Exo-Slayer-Testa-wannabe for the thousandth time, right?