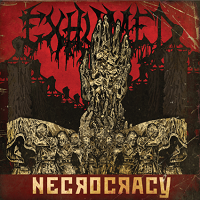 Exhumed in their uh, “exhumed” phase are a much more interesting group than they were during the flimsy Gore Metal and Slaughtercult years. Back then, it’s was more about being sloppy with death metal, feeling around the bottom of Symphonies of Sickness’s purse for ideas, not having much to do with being serious. Now, mainman Matt Harvey and crew have sharpened the riffs, tightened the nuts and lugs of the songs, and gone the route of less gore, and more thrash/death. It worked like a champ on their 2011 comeback All Guts, No Glory, and subsequently does the same with Necrocracy, their sixth album overall.

If you’re thinking a less melodic take on Heartwork with a more sinister twist, then keep on feeling that way, ’cause you’re not off-base with Necrocracy. The slabs of bile here don’t have an unearthly stench or anything; they’re just potent, quick-witted numbers with memorable choruses, like “Coins Upon the Eyes” and standout “Dysmorphic.” Harvey appears to understand the value of a good chorus, a veritable breakaway move from their normal procedure of stumbling and/or gurgling one’s way through vocal lines. Here, Harvey’s scratched and hacked (up for barbecue) vocals are the visceral narrator to catchy, oozing cuts like “(So Passes) The Glory of Death” and “The Rotting,” two numbers that will no doubt be live staples.

Those who have charted the progress of Exhumed might be surprised by an album like Necocracy; maybe not. It’s not death metal for the intelligently-inclined, but at the present time, Exhumed are one of the few go-to bands for this type of stuff who don’t feed on brutality or are technicality like Cannibal Corpse or Suffocation, but are total death regardless.  That counts for quite a bit these days.