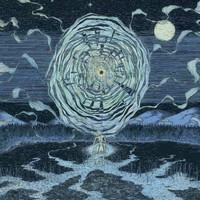 Some bands within the old school death metal movement are starting to get it. We just don’t need any more straight-up retro bands okay with sitting around and playing Autopsy, Entombed, or Incantation ad nauseam. We saw this at the beginning of 2014 with bands like Morbus Chron and Vanhelgd and it thankfully rears its head again with Morbid Dimensions, the third output from Norway’s Execration.

Morbid Dimensions takes the standard issue Scandinavian death metal movement of the early ‘90s and adds to it some dark atmosphere, psychedelia, and even a bit of dissonant black metal (along the lines of say, Deathspell Omega). The album wants nothing to do with sticking in one gear for the entire trip, so you will notice some changes going from some ripping speed to some crawling doom as well. Particularly in the slower segments does Execration flex its largest muscles. From the eerie opening of “Cosmic Mausoleum” to the haunting and somewhat trippy “Vestiges,” there’s just something about those creepy melodies as they begin to sink in that packs some killer weight. Not to say that the faster stuff can’t match up, as this is where they push in some of the dissonant black metal riffing from time to time that meshes quite well with the usual retro-riffing.

The unfortunate part is the overall length here. Clocking in at almost an hour with 9 tracks, a few of the lengthier ones could do with some editing and trimming. Morbid Dimensions still ends up being a nice, refreshing take on death metal but some of its efficiency is truncated due to the meandering found within the tracks. If the band can get a handle on this issue with album number four, the world will stand up and take notice about what Execration are doing. It’s nice to see that some death metal bands are willing to take a risk once in a while.