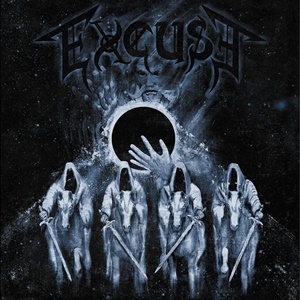 You gotta love the backwards E symmetrical look to the logo for this Finnish band Excuse. That touch adds to the evil, unadulterated raw appeal when you press play to Prophets from the Occultic Cosmos, their first full-length even after being together for over a decade. They’ve released a demo, a couple of EP’s and a four way split cassette over the years, setting the stage for these six songs. Many will feel like they are taking a way-back time machine to the raspy vocals and primal music churn contained within these tracks – where reverb, delay, and natural tones take center stage to add that extra razor-sharp texture to the band’s natural thrash platform.

Obvious musicianship skills come to the forefront in the Steve Harris-like bass engagement from Atte Aaltonen which spurs on the increased speed and fluid nature of guitarists Oskar Lindström and Anselmi Ahopalo during the longer instrumental sections of the shapeshifting title track. The serene instrumental sequence that starts “Black Crystal Visions” has a bit of early Metallica flavor before the quick tom rolls and galloping riffs take center stage – along with the semi-blasting/tremolo picking accents that added to the raspy as steel vocals makes for an intriguing whirlwind of extreme thrash circa the mid 1980’s, European style. Many of the passages contain spiderweb Maiden-esque accents for the guitar work as well as drop on a dime tempo changes, where the snare and ride cymbal often go into different time signature templates- and Oskar doubles on vocals, using a mix of rapid fire mid-range melodies and occasional screams in the best Sodom-ish manner possible. The record ends with the ten-minute plus epic “Watchtower of the Trans-Dimension” – featuring everything from cultural bass/guitar interplay parts to a calmer, moody atmospheric instrumental section around the six-minute mark before returning to a progressive thrash conclusion.

Excuse could be one of those unsung acts that achieve more of a cult status following versus the more commercial-sounding bands in this genre – but that does not diminish the quality of songwriting contained here. They’ve given the listeners a great, tight album that brings listeners back to the start of the genre.