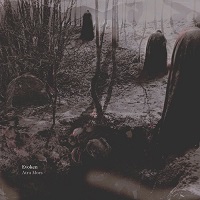 Baleful clouds consume the sky and choke out the sun, a frigid wind emaciating flora and fauna alike – the world left behind a lifeless husk. Though apt for an end of the world scenario, such is not the case here, nay, for Evoken has returned from the depths to drop upon the world its newest and perhaps blackest opus, Atra Mors, and it is a monster. An oppressive, suffocating, and infinitely black monster that aims to consume and destroy everything placed before it throughout its 67 minute runtime. And best of all it succeeds almost without parallel.

For those familiar with Evoken and the bran of doom they produce there won’t be many surprises here, only exercises in extreme quality. The crushing multi-guitar attack, bleak synth/keys work, and those ever present and absolutely cavernous growls of John Paradiso (the man’s throat is black hole, it must be). “Atra Mors” kicks off the album with quiet synth and rolling drum work, coming across as though a slow fall into an endless abyss, personal resignation building as guitar

comes in overtop and the listener nears the bottom. For 12 minutes this glacially shifting murk ebbs and flows, eventually a familiar ringing guitar emerging from the deep, an unnerving and melodic guiding light in an otherwise lightless expanse. “Grim Eloquence” is notable for how absolutely life draining the ending collapse the flows around the melodic leads are in its second half, the final gasps of life of one who cannot be saved or redeemed.

“A Tenebrous Vision” and “Requies Aeterna” are both brief and haunting interlude-like pieces, tranquil pieces of quiet that offer only tenuous respite from the devastating longer tracks. Though experimental pieces like this have surfaced within the framework of the band’s music

in the past, it was almost always within the context of the bigger works. Welcome in either case, separate they can be absorbed effectively on their own terms and work extremely well with the flow of the album.

“Into Aphotic Devastation” serves to close the album and summarize all of its best moments. Melodic leads interplaying with synth serve as an annihilating spear-point piercing through the rolling dark, a song

for the world which has long since been lost. Even when the pace picks up (here or elsewhere) it is a false hope of escape, serving only as brief bursts onward into the arms of further ruin. The song, like the album as a whole, bleeds from every pore the efforts of a band unparalleled in their craft, hell bent on sucking from the listener any joy or happiness they might otherwise have. From every low to every crushing further low that follows it, Atra Mors is exhausting and satisfying to no end. Fall into the dark and let Evoken strangle what life remains in your summer. Exquisite.