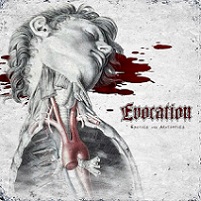 Cover albums are always unique as they can go in radically different directions depending on a particular band’s philosophy behind covering a song. Some believe they should mimic the original as closely as possible, whereas others believe they should experiment with new ideas, paying even higher respects by approaching the original from a new perspective. With their new covers EP, Excised and Anatomized, Swedish death metallers Evocation have chosen the former approach, offering very little in regard to new sonic dimensions.

Granted, the band does a fine job of reproducing these death metal classics, and the lack of fresh interpretation does nothing to hinder the heaviness of the offering. Approximately twenty minutes of brutality stampede through the speakers, and the production is sharp enough to cut to the bone. Also, the band’s decision to cover the notorious Napalm Death tune “You Suffer,” a song that clocks in at a monumental one second, shows they have a sense of humor amidst the mayhem.

However, the covers sometimes come up short in crucial ways. Despite the punishing groove of opener “For Victory,” this rendition lacks the density of the Bolt Thrower original, so though the listener still feels as if he is being beaten about the head with a hammer, it’s of the more standard toolbox variety rather than a Frankish war hammer. Additionally, vocalist Thomas Josefsson growls his way through the entirety of “Enigma,” forgoing the sporadic clean vocals Dan Swanö exhibits on the Edge of Sanity version. Though this creative decision distinguishes the Evocation version somewhat, it does so at the expense of the song’s story, losing the original’s schizophrenic quality.

If having some fun, paying homage to some classic bands, and tiding listeners over until the next Evocation record were the band’s objectives, then they succeeded. However, this release will mostly appeal to only Evocation purists. More casual listeners would be better suited waiting for the group’s next LP and sticking with the original tunes.