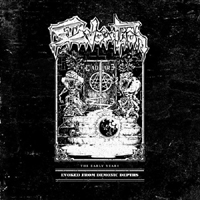 Taking into account how large the Swedish metal scene is, a band like Evocation has to do double the work just to get noticed. Further complicating matters is that they don’t play death metal of the Gothenburg or Stockholm variety – they’re a composite of the two, so after dissolving in the early 90’s and reforming in 2004, the band has clearly put their nose to the grindstone. To their good fortune, Century Media has taken notice and scooped them up for a multi-album deal, the first being Evoked From Demonic Depths: The Early Years.

Clocking in at barely under 60 minutes and with 14 songs, Evoked From Demonic Depths documents the band’s formative years in the fledging early 90’s death metal scene. The sound is suitably oriented for that era (think Entombed’s Clandestine), with thick, but sloshy guitars and clicky drums trying to make headway on cuts like “Through the Darkened Peril,” “The Ancient Gate,” and “Desolate Spirits.” And because the band refused to take neither the Stockholm or Gothenburg plunge, there’s a mish-mash of whirling, quasi-melodic riffs, to go along with the spare atmospheric part, as heard on “Where the Headstones Shine.”

The inclusion of rehearsal audio for “On A Journey to Heaven,” “Where the Headstones Shine,” “Spiritual Affinity” and “Veils Were Blown” isn’t exactly a good idea, for all four tracks are barely listenable. However, the closing number “Genesis” has some real teeth to it, probably because it was recently recorded at IF Studios (In Flames) and mixed/mastered by Jens Borgen (Amon Amarth, Symphony X), so naturally, there’s a huge sheen and shine to it that engulfs virtually the entire tracklisting. It also helps the song is pretty throttling, too.

Clearly a setup album before their next full-length hits, Evoked From Demonic Depths: The Early Years should be sought out for historical purposes only. It makes sense, though, for Evocation’s history is certainly an interesting one. Rare when a band is inactive for 13 years with only a few demos to their name and is on the precipice of becoming a death metal household name…but such is the career for Evocation.