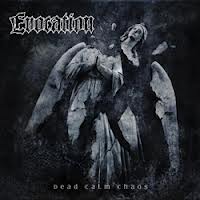 The unbridled reverence for Gothenburg death metal from the 90’s is insatiable, apparently. Once past the first wave of major bands (i.e. At the Gates, Dark Tranquillity, and In Flames), there’s an even greater pack of acts that remained solely at a cult level. All this does is prompt these bands to reform if they’ve split up, or give labels reason enough to reissue their entire back catalog, something that is happening for once-defunct death metallers Evocation. (PS: Can someone give Eucharist a nudge to reform?)

The reissue of the band’s 2008 Dead Calm Chaos reissue is unfortunately, not the first Evocation-related repacking job of the year – Century Media just did it for Evoked From Demonic Depths: The Early Years, meaning there’s a good chance many will balk at another release that doesn’t have any new material. There’s a noticeable absence of springy, poppy melodies coming out of Evocation on this 12-song platter, which ends up serving the band well. Any plays for the saccharine route immediately places them in the context of In Flames and Soilwork, which for a hardened, dirty band like Evocation, is anathema, basically. In turn, the hustle and bustle of strong, memorable cuts such as opener “Silence Sleep,” “Truth Will Come Clear” and album highlight “Tomorrow Has No Sunrise” churn out the type of easy on the ears death metal that if warranted, could get some winks and nods from the Stockholm crew.

It would also be important to note the guest spot from At the Gates/The Haunted axe-slinger Anders Bjorler, who turns in a pair of his patented solos on “Angel of Torment” and “Razored to the Bone.” Also, the beyond-ubiquitous Dan Swano (Edge of Sanity, Bloodbath) lends his virile death metal roar to “Antidote,” which is a prime take on The Spectral Sorrows-era EOS. However, both guest spots are near clandestine when injected into Evocation’s rock-solid death metal foundation.

The timing of two reissues and the aforementioned demo compilation certainly comes into question since the band’s new full-length Illusions of Grandeur will be hitting the market soon. There’s almost a bit too much to digest, especially from a mid-level Swedish death metal band such as this. Yet Evocation emerges as the sort of underrated and needle in the haystack band that melodic death metal needs every now and then.