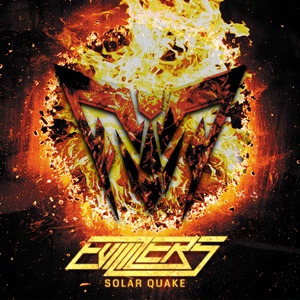 Evilizers is an Italian metal act that grew out of a Judas Priest tribute band from 2014. Releasing their debut album Center of the Grave in 2018, they’ve made the move to Punishment 18 Records for the follow-up with Solar Quake. An eleven-track affair, the group has an affinity for the traditional heavy metal style while occasionally venturing into doom and power avenues depending on the needs of each song. After numerous playbacks there are a few highlights and key areas of concern to assess for complete enjoyment depending on your tastes.

The rhythm guitars and back and forth interplay between Davide Ruffa and Fabio Novarese display obvious training and knowledge – injecting specific tracks with twin melodies, catchy lead breaks, or cultural hallmarks as “Earth Die Screaming” and the Judas Priest-like mid-tempo rocker “Time to Be Ourselves” exemplify. Right out of the gate the pounding drums of Giulio Murgia garner headbanging attention for his exciting drum fills and solid mechanics – the title track sure to raise fists and engage many into mirroring moves in simulation a la Iron Maiden. The production values and tones aren’t necessarily up to par with most metal label product in current times – you get the feeling that the distant guitars and lower bass frequency could be victim to smaller budget allocation. But the biggest struggle for many to take Evilizers seriously may be the dramatic, off the charts vocal delivery of Fabio Attacco. He can shriek, maintain the occasional bright note or two, but often has this nails on the chalkboard accent or warble that could cause many to shudder or walk away – even though he can be quite charming in lower registers for the semi-ballad “Shiver of the Fate”.

Combining influences from Black Sabbath, Metallica, and the aforementioned Iron Maiden and Judas Priest, Solar Quake at best has some interesting instrumental ideas from time to time and solid guitar riffs. Maybe some stronger singing and a better production would elevate the chances of Evilizers making a bit more of an impact on the next go around.