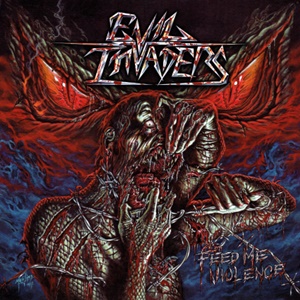 Establishing themselves as one of the strongest speed metal outfits in the current era, Evil Invaders align to their blitzkrieg offerings with this second album Feed Me Violence. Hot on the heels of a killer Pulses of Pleasure debut in 2015, the band toured extensively across Europe and hit the festival circuit hard, issuing In for the Kill as an EP last year to satisfy the growing hordes. Anyone can grab the spotlight in youthful hunger, the question on everyone’s mind is: how will the follow up maintain and possibly further Evil Invaders ascent up the ranks as not just a flash in the pan, one trick pony? In this case, it’s all about expanding horizons in as many ways as possible while staying true to form – with melody and tempo variance at the heart of this record’s appeal.

Never fear, the maniacal ripping riffs, bullet train tempos, larger than life/simplified vocal hooks and smokin’ lead play still remain top of mind for sinister efforts like “Mental Penitentiary” and the title cut. Where these songs change things up a bit are in the slower, thoughtful transitions where many of the band’s affinities for traditional metal crop up. Guitar harmonies pop in and out, or atmospheric keyboards against a Forbidden-like instrumental sequence appear in the 51 second “Suspended Reanimation”. The rhythm section taking great measures to accent the subsequent, crushing slower riffs that start “Broken Dreams in Isolation” in an equally classic motif – before the straightforward up-tempo transition heightens the aural investment of the track. Joe as a vocalist expands upon his obvious Agent Steel-screams, bellowing lower parts in equal control of his facilities, translating the lyrical content as a metal madman should. The clean guitar passages that build during “Oblivion” mesmerize, a seasoned blend of blues-infused tact and European finesse – while closer “Among the Depths of Sanity” at 6:36 weaves in progressive measures, alluring layers of tension, and axe action plus gang-oriented choruses that bring about everything from Vektor and Holy Terror to Painkiller period Judas Priest in this mighty cut.

Feed Me Violence succeeds because Evil Invaders know that while speed metal is in the DNA, they can’t remain stuck in one gear throughout these records if they expect to sustain longevity in this business.