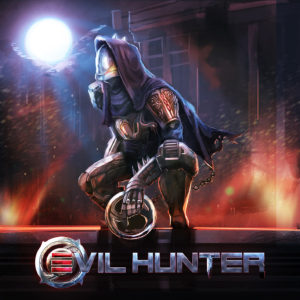 Seasoning improves the chances of an upstart act making a splash in a scene overpopulated with bands at this point. When musicians have already recorded albums and toured the globe, they know what the fans want – which makes Evil Hunter from Spain intriguing right out of the gate for their self-titled debut. The quintet delivers a sound that straddles conventional heavy metal with melodic hard rock and power ingredients that should go down a storm for those who love North American and European influences.

Immediately noticeable right out of the gate for “Surf the Waves” is the trained guitar heroics of José Rubio and Victor Durán – the type where everyone from Randy Rhoads to Yngwie Malmsteen factor in the solid riffs and lead break chops/transitions that keep the song on its anthem rolling ways. Properly diversifying the material between catchier offerings that contain choruses that are easy to get into like the Fifth Angel-oriented title track or the AOR-ish semi-ballad “By Your Side” and the headbanging, heavier cuts such as “Heartbeat” eliminates any feeling of monotony, which can occur even the very basic styles of the genre. Many will place Evil Hunter in that mid 1980’s to early 1990’s heavy/power category, when Judas Priest, Iron Maiden, Helloween, and Accept made an impact and other fringe bands like Leatherwolf or the already-mentioned Fifth Angel gained attention. As a vocalist Damián Chicano has that sinister, Sunset Strip-bluesy bite that along with a confident ability to hit the higher notes when necessary differentiates the band from the pack. Some may think Evil Hunter should in the long run consider developing more of a Halford/Dickinson-style strength in that department, but it’s not a major deterrent to the enjoyment of the solid songwriting chops and musical mechanics.

This is a decent start for the band – and can only get stronger through some live performance work. Fire the cannons high to the sky, as Evil Hunter set their sights on the power/heavy metal fan within us all.