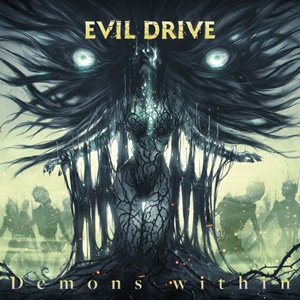 These days it’s apparent that cross pollination of genres appears to be the ticket to gaining a wider array of followers under the metal umbrella. Hailing from the fertile lands of Finland, Evil Drive have been together since 2013, delivering a brand of melodic thrash/death metal that contains influences past and present. Releasing two previous full-lengths with The Land of the Dead in 2016 and Ragemaker in 2018, they’ve since replaced their rhythm section with bassist Matti Sorsa and drummer Antti Tani heading into their third release Demons Within. Obvious right away through these ten tracks is a strong twin guitar sensibility, fierce growls and roars on the vocal front, as well as thoughtful hooks and diverse tempos that conjured images of the Swedish/Finnish melodic death metal style one moment, adding in power, traditional, and thrash embellishment to expand the template.

The guitar mechanics and supplementary lead breaks and additional spices from J-P Pusa and Ville Wiren contain a lot of hallmarks that put acts like In Flames, Dark Tranquillity, and Children of Bodom on the map. Look into the neoclassical touches against the mid-tempo crunch and fierce transitions for “Breaking the Chains” and “Rising from the Revenge” as a clear example of executing the right combinations in a very catchy yet aggressive manner – as if taking into account aspects of Iron Maiden and Slayer along the way. Tightly weaving in all these little earworms from progressive licks during “We Are One” to lightning quick drum fills and stop/start anticipation riffs for the heads down “Bringer of Darkness”, the quintet waste no time getting to the meat of a song, putting all the parts together, and then moving on to the next idea in a radio-friendly three to under five-minute window. Viktoria Viren as the vocalist has a commanding presence through her raspy screams and gritty growls – a la Angela Gossow (ex-Arch Enemy) but can also pull off an interesting melodic voice during the verses of the slower, doom-oriented “In the End”. And for those who love a Viking/Amon Amarth marching outing where twin guitars and massive, thick riffs make for mandatory headbanging activities, look no further than the title track for a favored highlight.

Third albums in a discography usually dictate whether a band could be headed for a healthy, fruitful career or may want to venture off into greener pastures. Demons Within is leaning towards the former, as these musicians have the right skills, songwriting abilities, and promise to find themselves on numerous tours and festivals of a melodic death/thrash kind.