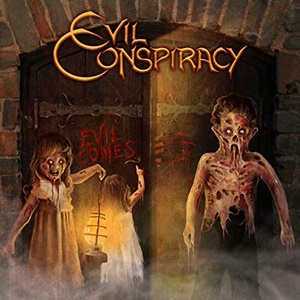 Admitting on their Facebook page difficulty in describing one’s own music, Swedish metal band Evil Conspiracy have been around since the early 2000’s and released four demos prior to their Prime Evil full-length in 2014. Finding a new drummer in 2016 with Henrik Persson, the band signed with Sliptrick Records for their follow-up Evil Comes – stylistically developing a sound to these ears that incorporates traditional, power and thrash influences into a musical cocktail that could grab decent attention from all three factions of followers.

The drumming/rhythm section work within “Demon Speed” plus “Violent Intent” certainly tips a bit of aggression and energy nod to old school power/thrash, but there’s the added bonus of tasteful groove and finesse that comes from a Judas Priest/Mercyful Fate angle. On the other side of the spectrum, the twin guitar activities drive home numerous harmonies and clean to aggressive options – the type that put Accept on the map and made Metal Church a mainstay, as “Resurrection” delivers during the second half of the record. Gang-oriented choruses penetrate “Dogs ov War” and “We Rise”, both mid-tempo efforts that feature unison guitar/vocal hooks that easily produce anthem retention possibilities and solidify themselves in set lists for quite a while. The possible rub for some listeners to fully embrace Evil Conspiracy could lay upon the vocal delivery of Fredrik Eriksson – as it’s an interesting meld of maniacal lower grit and solid mid-range to slightly higher melodic octane power. Imagine a bit of David Wayne from Metal Church with Charles Rytkönen of Morgana Lefay and that will give you insight into his versatility – his best efforts appearing on the slower, lumbering epic “Endless Darkness”. The ten songs contain enough variety so as to not lull the listener into tedious boredom – Evil Conspiracy properly mixing up the tempos and arrangements while keeping most of the material around the four to five-minute mark.

Evil Comes works best for those who want power numbers, occasional bursts of speed, and then switching things up into 80’s traditional influences for hooks and melodies. Another Scandinavian treat to investigate if all the sub-genres mentioned above tickle your fancy.