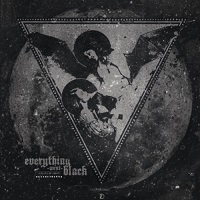 A bit of a dark cloud hangs over Everything Went Black and theirCycles of Light debut, as founding member Brian Kennedy passed away in March of 2011. It’s in these moments when bands

usually sink or swim, with the St. Louis-based post-hardcore quintet preferring the latter. As such, they come close to taking up the rear in the metallic hardcore department, but look to be just a few paces off the lead set by Trap Them, who might be the strongest point of reference.

At a sparse 27 minutes and nine songs, the album does the right thing by getting in and getting out quickly. The almost whimsical nature of some of these songs seem to work in the band’s favor, most notably “Kingdoms,” which does a hard left-turn into post rock territory once singer

Brandon Hoffman gets done emptying out his stomach. To his credit, the frothy-sounding Hoffman manages to turn in some of the album’s most distinctive moments, as heard on “Gods of Atlantis,” a song that trudges with the singer’s marching orders in a mud-caked wasteland of crossover and sludge.

The extensive amount of vitriol spewed forth on “Lifeless,” “Thorn Feeders,” and “Baptists” are wound tightly into short song structures, something that always serves bands of this ilk well. The album doesn’t totally take the full d-beat plunge, with the aforementioned “Kingdoms” and airy “Halo

of Vultures” (which for some peculiar reason, begs of Darkest Hour) helping establish some sense of variety.

Mish-mash bands like Everything Went Black need to stoke the fires of versatility as much as they can, for the heads-down, d-beat-and-go arena is filled up by Trap Them, Rotten Sound, and Disbelief. Therefore, the moments when the band goes outside of their comfort zone end up being the most refreshing thing about Cycles of Light.