Evergrey – The Storm Within (AFM Records) 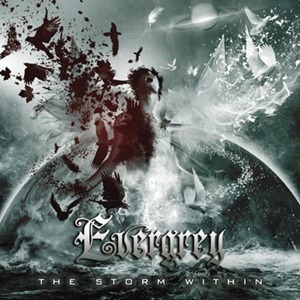 The first video/single “Distance” sets an early tone for this tenth studio platter – a sparse, echoing keyboard refrain from Rikard Zander provides a moody arrangement where guitarists Tom Englund and the aforementioned Danhage hammer home a crunchy, doom-oriented main riff that shuffles back and forth in a stair step, tick-tock clock fashion. There’s an inner confidence that comes pouring through tracks such as “Passing Through” (love the cyber-kinetic swirling keyboards and equally hypnotic melody choices here) and the explosive, double kick-oriented “My Allied Ocean” that feels like Evergrey plays to its strengths from the past- including appropriate placed narrative passages- while not forsaking a lot of the modern and extreme elements that exist today as tools to add for flavoring. Guest duets include Tom’s wife Carina Englund on the intriguing ballad “The Paradox of the Flame” and a couple of spots with Nightwish singer Floor Jansen for the spacious “In Orbit” and almost seven-minute dark melodic masterpiece “Disconnect” that moves from heaviness to alluring keyboard-oriented quiet before kicking back up into this riff sequence of evil gallops and bends. Never mind the jaw-dropping lead break tradeoffs that peel off arpeggios one measure, then quietly embrace the central mood of the song the next- upper echelon for sure on the aforementioned “Passing Through” and blues-oriented “Astray”.

Basing the running word theme on an interstellar love/loss/survive experience that most of the human world can relate to, Tom’s voice shapes the content with his known impassioned precision and heart-felt delivery. Many could learn a thing (or ten) about his specific choices in terms of what to say and how to say it – not as easy as one may believe in the world of power and progressive metal. All 11 tracks reach out to touch the soul – the grey-oriented cover color scheme alluring in another descriptive set up to the contents within. Early to tell if The Storm Within will eclipse acceptance-wise the beacon of early Evergrey discography – but after numerous full playbacks, it resonates deeply to all of the outstanding qualities one expects from this benchmark act.