Evergrey – Hymns for the Broken (AFM) 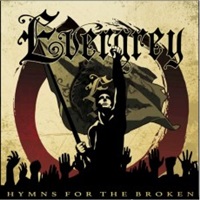 Fortunate to be on the ground floor running in my Snakepit magazine era through their debut album The Dark Discovery, Evergrey has always been a favorite in the dark power/progressive metal realm. Incorporating nuances and textures, sound effects, and narrative elements around dynamically moving song landscapes and the emotional, passionate Tom Englund-led melodies, we all have our favorite albums to treasure (Solitude Dominance Tragedy and Recreation Day here). Early word on the street is due to certain former key members rejoining like guitarist Henrik Danhage and drummer Jonas Ekdahl, the ninth studio album Hymns for the Broken is a return to classic Evergrey – darker, heavier, and moodier. Can it be true?

Yes and no to these ears, the 12 tracks encapsulate everything I’ve come to love regarding this Swedish act. Unafraid to sit a myriad of Rikard Zander-led keyboard parts against soul affirming, bluesy guitar breaks in “A New Dawn” one minute, then ride a semi choppy distortion measure the next, only to move into atmospheric heavy ballad territory for the 6:26 highlight “Archaic Rage,” Evergrey excel at the correct album sequencing, taking you on a mind/body journey every time. What would seem too modern or out of context for other bands suits the band just fine, as they never forsake the moving ethereal value that is a constant throughout the years. “Barricades” and the piano driven “Missing You” are two songs that 90% of the power/progressive metal bands could never convincingly pull off, yet Evergrey do because talent and execution triumph above all.

The final two songs “The Grand Collapse” and “The Aftermath” are each 7 minute plus pieces that feature the time signature changes, stop/starts, bursts of frantic play, and musical chemistry we all know and love. Tom’s melodies once again mesmerize: he doesn’t always feel the need to soar to the heavens, he realizes that you can carry a multitude of feelings in somber, lower passages through a similar register. Slide guitar, vocal effects, acoustic ambiance, these are tools to enhance and not override the album experience.

When looking at the overall final product, I do not consider this a ‘return’ to Evergrey’s early years, especially in terms of production, because they’ve spent their entire career honing their craft like a fine sword. Evergrey are kings at injecting a magnitude of feelings and emotions that maybe lurk deep within the recesses and through music, words, and songs convey what a majority of power/progressive metal followers want to say, but need this band to deliver. Hymns for the Broken is a premiere release from a veteran band, and probably will sit side by side with my two other pinnacle records from these Swedes, to be played hundreds of times over.