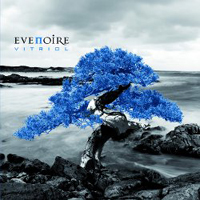 Scary to think, but we might be reaching the rung on the Goth metal ladder where Epica, not Nightwish are the primary point of comparison. Not like we have any beef with Simone Simons and team, yet they’re merely an extension of the formula Nightwish gave birth to, albeit with subtle nuances. So naturally, most these stylistic hallmarks (minus the male grunts) are on full display for Vitriol, the debut from Italy’s Evenoire.

Fronted by Elisa “Lisy” Stefanoni, Evenoire’s up-front symphonic metal leanings are garnished by even more up-front and dominating guitars…like Epica. In fact, Stefanoni often gets pushed aside so the guitar work of Alessandro Gervasi and Toshiro Bruneli can do the grunt work, as heard on “Days of the Blackbird” and the impressive “The Girl By the Lake.” Adding to the obvious folk influence than hangs over the album’s nine songs, Stefanoni also gets in on the act with a nice little flute solo on “Minstrel of Dolomites.”

Because she’s so close to being an afterthought (strange for symphonic metal), Stefanoni’s impact moments are reduced to the pings of “Misleading Paradise,” where she teams with guest singer Gaby Koss, a German soprano. Outside of that, the all-acoustic “The Prayer” showcases Stefanoni’s softer side, which frankly, suits her best considering she’s not quite equipped at this juncture to hang with heavier guitars.

Stating the obvious, the surplus of similarly-styled female-fronted Goth metal bands probably won’t help Evenoire’s cause. There’s not enough bells and whistles on Vitriol that would give the band even the slightest bit of distinction, but hey, a good flute solo is usually a good way to give the folk metallers stomping around.