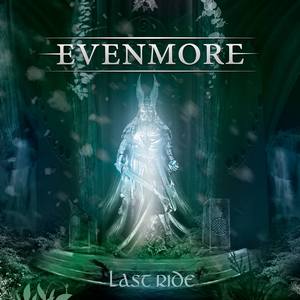 A relatively fresh band among the ranks, Evenmore released their first EP back in 2014 entitled The Beginning. Celtic power metal, as the band states on their official website bio, but there’s usually more than meets the eye with a more simple description and their first full-length, Last Ride definitely fits the billing as more than it would appear. Evenmore can cover a wide breadth of material and appeal to quite a sizable amount of metal’s legions.

Folky, epic sounding metal that straddles elements of power and melodic death metal is a bit harder to roll off of the tongue, and may cause one to think that Evenmore feels more akin to Eluveitie or other like-minded acts, but Last Ride tends to come off as more of an individual entity. Though it should be mentioned that ex-Eluveitie hurdy gurdy/vocalist Anna Murphy does appear on a few tracks (as does current Firewind vocalist Henning Basse) – which should give you an indication of the level of talent the band has to attract such talent. It’s also a conceptual album, with some characters telling a story. The storytelling gives the album some cohesion and flow, and makes for some good dynamics between some more somber and melodic pieces (“Will You Cry,” “Eleana”) and heavier tracks that verge more towards melodic death metal (“Bitter Victory,” “Poisoned Thorn”). Vocalist Melissa Bonny (see also Rage of Light) has some solid pipes – maintaining an emotive range (“Breaking the Silence”) but also able to push the heavier end with growls with equal aplomb. Outside of the numerous moments of excellent traditional metal riffing and melodic solos, Evenmore also makes good use of the band’s knack for employing more traditional folk instruments (bagpipes, whistles) among the songs. “The Ride Begins” and “Last Breath” should give ample proof for their ability to blend the metal/folk elements to a fusion that doesn’t feel forced or lean too far in one direction.

Last Ride is an impressive debut that will undoubtedly become a sleeper hit as more word of mouth spreads itself around. Just the right combination of folk, power, and death – with storytelling ability to back it up.