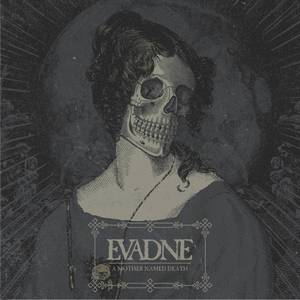 It’s been a while since we’ve heard from the Spanish melodic death/doom band Evadne. They had a 2014 EP (Dethroned of Light), but one has to go back to 2012’s The Shortest Way to find a full-length release. Regardless of the time away, it’s clear after a listen or two of A Mother Named Death that the band is no worse for wear and can still bring the gloom just as well as any of their established peers.

The usual references in tow (My Dying Bride, Katatonia, Draconian, Novembers Doom), Evadne pick up right where their previous material left off. But when you can execute it as well as Evadne can, there’s no need to sit around and reinvent the wheel, particularly this far into the game. Expect high quality doom death in all its melancholic splendor. As can be predicted, the path ahead is long and slow but they occasionally move forward with a more deathly/blackened march (which does not relinquish any brutality). The key with Evadne is emotion – sorrow that pulls down the soul, and lumbering cuts like “Scars that Bleed Again” really show what they are all about. Low and anguished roars lead the way, with a good balance of crunchy guitars with more mellow and clean played segments that add more atmosphere. They utilize clean vocals as well (see “Morningstar Song”), but it’s never an overdone component, just enhancing the overall formula by hitting more emotional peaks.

A Mother Named Death treads familiar territory, but the band’s songwriting skill, as well as ease with allowing each track to breathe on its own, give Evadne their seat at the head of the table with the bands mentioned above. There’s real flow and a sense of purpose in each track, and they make great use of the extended length tracks instead of pooling them into a sloppy mess. Death doomers should love it.