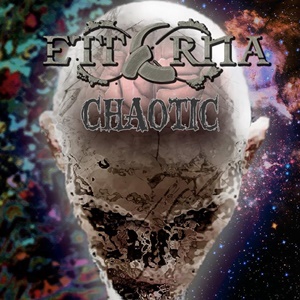 Always game for new blood from outside countries, here is Etterna, a five-piece melodic progressive metal-oriented act from Slovakia. They’ve been around for a couple of years, and Chaotic is their debut full-length – an eleven-track odyssey that seems to traverse multiple moods across the spectrum, establishing a versatile approach right out of the gate. With the recording taking place over 18 months and at an interesting pace (two to three songs recorded together at a time, then writing separately and returning to the same process), you can understand the development of varied dynamics that occasionally grab AOR/commercial influences just as easily as extreme or alternative nuances.

The jagged bass/drum development during “Before Our Lives” gives the crunchy/jumpy riffs and forceful melodies that much more rocket fuel propulsion, rivaling classic Eldritch (although the staccato, down-tuned conclusion with growls seems a touch out of place). You can hear Etterna deliver multiple ideas and flesh them out over the course of the song – where the focus one second can be on the musicianship, or the next a quicker rapid-fire lyrical delivery, almost rap-like during specific verses of “Swan”. Stunted progressive measures signal a love for all things Dream Theater during the opening strains of “The Independent Dreamland”, but the subsequent guitars and groove-oriented rhythm section work weave in a bit of that alternative/modern feel, something you would expect possibly from Trivium for instance. Drummer Tomas Visnovsky becomes a mini-Scott Travis for “Demon” – the vocal harmonies coming across from that 90’s alternative/emo era, while the guitar harmonies possess a bit of Scandinavian melodic death flair.

Ultimately this genre-hopping that takes place song to song can be detrimental to Etterna establishing a solid platform. It’s one thing to possess the ability to add three-four different flavors to the mix, but most people getting into a band for the first time want some consistency top to bottom. The quivering melodies in spots from singer / guitarist Ady Hnat during “Betrayed Love” take away from the otherwise moving acoustic guitars and proper drum tempo to support the proceedings – one of the back half highlights for sure.

Chaotic is a melodic metal album with progressive-minded ideas, sure to spark the imaginations of many who like versatility in their bands. It could be interesting to see where this act goes on future outings.