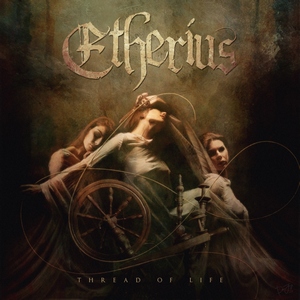 When it comes to instrumental metal music, there’s a certain part of the scene that tends to flat out ignore it due to the lack of vocals and/or catchy hooks. Despite the complexity of metal, many find themselves lost without some sort of vocal to grasp onto. But to those people, it’s still worth giving New Jersey-based band Etherius a shot. This is an instrumental act that has some strong crossover with the ‘vocals necessary’ crowd.

So what gives Etherius the edge then? The sheer number of melodies that they manage to fling at you over the course of a 3-4 minute song. The music is rather hook-infested, and it does seem to feel that while you are listening, you grab one melodic notion and then you are given one more of equal magnitude and impact. Take the first single released, “The Soothsayer,” which has some older and thrashy vibes to it, while carrying across the progressive flag high with addictive and intricate leads/solo work/shred that instrumental fans crave. There’s a lot to absorb within the music for those that want to take the time to do so, but there’s also an immediacy that many instrumental bands lack. This is the key to Etherius’ approach – being able to provide some soaring and quite frankly, thrilling melodies (see “March and Defy”) with a technical edge that never feels cold. With songs that never go beyond the 5-minute mark, they are also making sure they stick to the point. The songs never linger – the thrashy, get-in and get-out mentality carries over and lets the songs strike fast and hard.

Thread of Life perpetually captives the listener while moving deftly from one energetic melody to the next. Etherius may be a new name upon the scene, but the impact of this album is one that is bound to leave a mark. Fans of everything from thrash and power metal to melodic death metal are sure to find plenty to enjoy, even if they aren’t ones who gravitate towards instrumental metal.