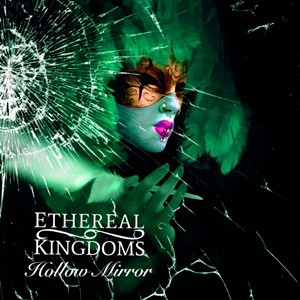 Danish symphonic metal act Ethereal Kingdoms have been quite productive on the recording front since their 2017 inception. A self-titled EP came out that same year – and here they are again signing with Mighty Music for a full-length debut Hollow Mirror. What’s always intriguing about the genre is hearing what influences shape the band’s overall style and outlook – in the case of this quartet, they are willing to incorporate gothic and dark/extreme elements against an elegance that keeps the listener pivoting throughout these nine tracks.

Certain songs such as “Heartchamber” and “Silent Dance” contain hooks and grooves that lie on very commercial lines – the semi-operatic vocal melodies swaying in a Nightwish-oriented comfort zone, the music supporting the singing in a seamless fashion, the extra orchestration and woodwind/classical accents providing the extra cherry layer on top of the proceedings. Narrative passages and a steady double kick foundation start the record off for “Distance”, Sofia Schmidt as a singer serene and subtle during the verses and gaining momentum in her upper register through the bridge/chorus as supplementary blackened screams give certain words atmospheric contrast. Guitarist Christian Rasmussen can go from crunchier rhythms to clean passages that convince you of the man’s stellar abilities – “Ashes Within” exploring Epica meets Wintersun territory, while the doom/gothic sides of “Embrace Me” revert to a time when the early/mid 90’s European scene gained momentum with the works of The Gathering, Theater of Tragedy, or Moonspell. And towards the end of the record, the group cover “My Kantele” from Amorphis, adding their dual clean/growl slant and giving the song the credit it deserves for being a set list/band favorite since it’s release in 1996.

Ethereal Kingdoms aren’t rewriting the symphonic metal landscape, but they do take the ideals and open creativity of the genre and do their best to blend their love of gothic, folk, and darker/extreme metal on top of things. Because of this Hollow Mirror will reflect adequately for most who love the diverse approach and attention to catchy melodies/harmonies throughout.