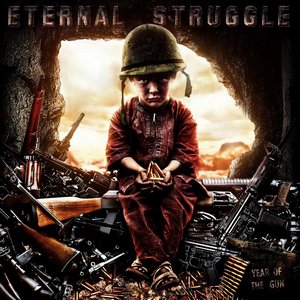 Hardcore is always at its best when it provides that immediate, pissed-off energy. Israeli act Eternal Struggle find themselves able to provide plenty of volatile and caustic energy on their debut full-length in Year of the Gun. Those keen for acts that manage to combine hardcore and punk immediacy with a strong, extreme metal underbelly are going to get some mileage out of this one.

With 15 cuts that all bare plenty of teeth in a span that usually runs for about 3-minutes, Eternal Struggle doesn’t slow down to sugarcoat the point. The riffs (and vocals) are quite angry, with that punk-ish attitude being augmented by a thoroughly metallic heaviness. Don’t confuse this for ‘metalcore’ in the modern sense though, as the band keeps it blisteringly heavy and gritty at all times. Groovy, metallic sounding tracks like “To My Enemies” shine brightest with mid-tempo beatdown pacing, allowing the attack to fully unleash and let the band really explode in some moments of increased tempo aggression. While you can start to get some predictability into the mix, the band also tosses some change-ups in, such as the short blitzkrieg that is the full-out assault of “Propaganda” or thoroughly groovy “Dependence.” With releases like this that offer a dose of adrenaline, in the end its all about the sensation of being knocked backwards and being angry about it, and Eternal Struggle capture this well.

Year of the Gun has that old school ethos of hardcore and punk while giving it a rush of metallic heaviness and aggression to provide maximum levels of fury. As an album aimed at the ‘anger as catharsis’ notion, it thoroughly succeeds in its mission with corrosive glee. Eternal Struggle wield just the right amount of energy and urgency to make it all work.