Eternal Gray – Your Gods, My Enemies (Season of Mist Records) 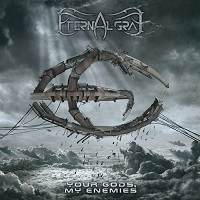 Few reference points exist for Israeli metal outside of Orphaned Land, who operate entirely on their own exotic plane. The rest of the bands

that have come from this area have failed to make a dent, although our own Ken McGrath will give props to the long-defunct Rabies Caste. Several paces behind Orphaned Land in the popularity department is Eternal Gray, who formed in 2001, and are releasing their sophomore effort, Your Gods, My Enemies.

Parlaying a mix of modern death metal (there’s also a prevailing Gojira influence) into this 10-song offering, Eternal Gray oftentimes fail to find the right brushstrokes of their mostly-American sound. The riffs are total balls-and-chunk, with little flair, so they step on the toes of what Chimaira would be doing if they were more straight-death metal. In turn, the band doesn’t sound as in-step with their homeland as one would like, which is shame – Israeli-sounding death metal has an excellent ring to it.

If one is really paying close attention to Your Gods, My Enemies, it wouldn’t be a stretch to say Eternal Gray is the death metal version of Nevermore. Obviously, there are no clean

vocals, but the chug-a-lug and riff ideas presented on songs like “Desolate the Weak” and “Blind Messiah” wouldn’t be too out of place on a Nevermore album, albeit in a much more extreme form.

There’s no real identifier for a band like Eternal Gray, who have taken the melting pot approach and applied it across the board on Your Gods, My Enemies. Sometimes, this method comes back to bite bands in the butt, for metalheads often like their music served on a plain-as-day silver platter, without any crossing of the wires. For Eternal Gray, a little bit of everything just isn’t enough.