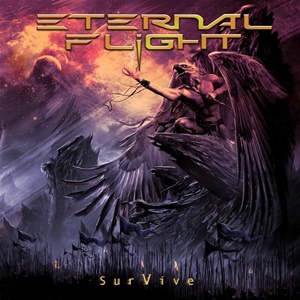 Aware of vocalist Gérard Fois through his previous work in the French power/progressive metal act Dream Child, who released two albums in the late 1990’s, Eternal Flight has been his main band since 2001. SurVive is the fifth studio record for the quartet – a futuristic concept effort where Morphoenix, the band’s mascot, fights against the forces of evil, attempting to preserve the Earth and humanity as we know it. Aligning perfectly to the band’s traditional power metal with melodic/progressive touches, this nine track effort bristles with force, finesse, and dynamic diversity to hold the listener’s attention, delving deeper into the nooks and crevices through successive playbacks.

The pacing of the record demonstrates veteran experience – smartly contrasting the early powerhouse ‘call to arms’ anthem of opener “Will We Rise Again” that features a bevy of double kick shifts/ twin harmony guitar accents with a more mid-tempo, straightforward hard rocking follow-up for “Hear the Call” showcases the multiple sides of Eternal Flight when it comes to hooks, riffing, and individual highlights. Influences from the classic brigade of King Diamond or Savatage float into specific atmospheric touches for “The Promise” – Gerard employing a theatrical voice that properly alternates textures from verses to chorus, matching the slower, majestic musical components. Heavier, stunted interplay between the guitars and drums takes on a rhythmic, exotic nature to make “Is This the End” another standout, while many may think of the uplifting chord combinations and transitions during “You and I” as a fitting launch point to Helloween/Gamma Ray for inspiration. All these musicians excel at their craft – weaving together solid power/progressive metal in a smooth, melodic, and logical context. Add in the magnificent, multi-octave prowess of Gerard as a singer (check out his mysterious, retro-spacious work on closer “Children of the Earth”) plus his subtle, steady use of keyboards throughout and you quickly understand how infectious and appealing this record can be on first listen or fiftieth.

A new start for the band on Metalapolis Records, SurVive showcases Eternal Flight at their most impressive when it comes to songwriting and performances, delivering a concept record without the overarching orchestration, narration, or additional bells and whistles that could be distracting.