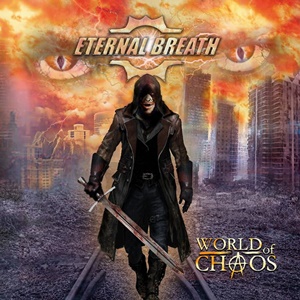 Natural evolution takes place in any band from its debut record to the follow-up. At least one hopes that you’ve learned, gained knowledge and experience while breaking free from your direct influences, and can apply these aspects to the benefit of a stronger, cohesive effort each and every time. When it comes to Belgian heavy metal act Eternal Breath, they took three years composing and revising material for this second album World of Chaos – moving from self-released ranks to Sliptrick Records in the process. Evaluating this record on its own accord as it’s this scribe’s first experience with their songs, the band execute a mix of old school power with traditional and thrash parts in such a way that most will close their eyes and believe they are taking a trip back in time.

Evident early is the use of tight transitions and straightforward tempos with a natural sounding snare/kick combination which is refreshing next to all these digitized/ triggered sounds that penetrate the metal landscape. Elevating the blood flow and energy level seems appropriate when you have a title like “Need for Speed” – even allowing vocalist Andy Polfliet to hit some Halford-esque falsetto notes against his gritty, natural mid-range delivery. Guitarists Robin Vancayseele and Marino Decaluwé use heads down riffs and bluesy, melodic lead breaks to set the stage for the metal proceedings – crunchy in an Accept-like charge for “Fight for Metal” while enjoying some stop/start harmonies and tradeoffs during the darker/thrashier “Revenge”, melding together a bit of Iced Earth with older Death Angel. Guest piano and vocals appear from Tiffany Veys during “The Greatest Loss”, offering some serene dynamic twists during the chorus and concluding movements of the arrangement.

While commendable musicians, the main problem in full enjoyment of the record lies twofold at the hands of execution and the sometimes warble-oriented vocals of Andy. There are many times throughout the songs that you wish the guitars would let loose a bit, or the drumming be a bit more free-flowing and not as mechanical as you’ll hear on songs like “My Redemption” or “Follow Your Dream” – and the latter showing Andy’s obvious limitations when stripping down verses into a ballad format. It’s just a case where a bit more seasoning and critical ears could make their third full-length more enticing and endearing to the power/thrash and traditional crowds.