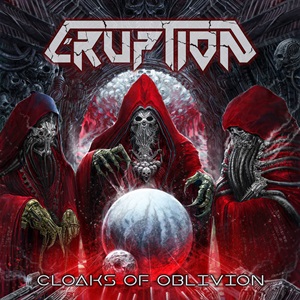 Beyond being the infamous guitar solo that ignited Van Halen’s profile in the late 70’s on their debut record, Eruption in this incarnation represents another Slovenian act putting their stamp on the thrash scene. Cloaks of Oblivion is their third studio full-length and first in five years – last seen with the Live Transmissions digital EP release in 2014 plus getting new members on second guitar and bass settled in to the proceedings. Ears perk up in this scribe when taking in background information regarding the quintet – especially if willingly throwing about names such as Anacrusis, Voivod, and Helstar amidst the usual Bay Area influence banks. Usually outside the box affinities in the metal realm equate to a potent, original product – and that’s what you’ll gain through this nine-track recording.

The quintet float between speed, power, and progressive thrash riffing and tempos – probably paying keen attention to the work coming through in the late 80’s and early 90’s, especially from left field acts that veered off the Big Four path. The stacked rhythmic propulsive guitar/bass/double bass connection for “Drones” for instance may contain occasional squeals or modern ferocity during the transitions, but the main riffs and hooks come from a Sanctuary/Helstar template – gaining even more separation from the typical thrash pack through the shrieking, multi-octave power of vocalist Klemen Kalin. Occasionally flexing the musical proficiency muscle when necessary, the lead breaks and rhythm section versatility puts Eruption in upper echelon glory – even in a gallop-oriented state a la the Cyclone Temple-ish “Sanity Ascend” or conversely on a doom meets straightforward mid-tempo anthem arrangement for “Reborn into Demise”. Because the band choose to never stay stuck in one gear tempo-wise, you gain many opportunities for surprises and jaw dropping hooks – Nika Krmelj’s bass proficiency against the speed riffs for “The Yearning” easily a second half highlight, as Klemen unleashes a Warrel Dane/Jon Oliva-ish sadistic scream for the ages.

Choosing to keep many of the songs a bit on the longer side makes sense – advanced guitar play often featuring exotic chord combinations, quick hitting transitions, plus dynamic elements that can be blasting one minute or plodding the next ensure no boredom as these songs burst with energy. Eruption could put Slovenian metal on the map with Cloaks of Oblivion – those who love power/thrash with tons of melodic sophistication and musicianship galore need this record immediately.