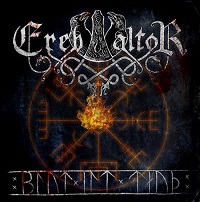 A Bathory tribute album with no sign of any song off of Octagon. Shame on Ereb Altor. Actually, not – everyone knows what a pile of junk Octagon is. (The same could be applied for Destroyer of Worlds, but we won’t go there.) Sweden’s Ereb Altor have never been ones to hide their affinity for Mr. Quorthon and his mysterious/legendary/totally awesome ways, which is why the Blot · Ilt · Taut album should come as no surprise. Frankly, it’s quite the cool idea giving how thorough and flexible their renditions of classic Bathory songs are.

Obviously, nothing past 1991’s Twilight of the Gods to be found. After that point, Quorthon had lost his plot anyway, but prior, he was the first to readily explore the terrain now otherwise known as Viking metal. Those tracks are represented in top-notch form, especially the driving, wind-swept “Home of Once Brave,” one of Hammerheart’s better cuts. “Twilight of the Gods” (the song) gets an excellent treatment mainly because of Daniel Bryntse’s airy, towering clean vocals.

The brutish, black metal-paving “A Time to Die” properly serves as the album’s lead cut, while classic, necro, basic plowers like “The Return of Darkness and Evil” and “Woman of Dark Desires” display Quorthon’s early trail blazes into the realms of death and black metal. The Swedes (Ereb Altor, that is) have simply updated these songs with modern production touches, thus ensuring the original throttle was left intact.

As mentioned above, Blot · Ilt · Taut sounded like a good idea right off the bat. And while it’s not a suggested move for every band, those who have some semblance on how to handle material as revered as Bathory’s are more than welcome to give it a go. Ereb Altor can walk into the gates of Valhalla with their heads held high.