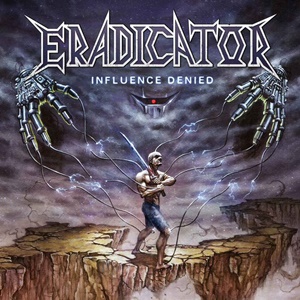 Ideally the development of a band takes specific stairstep maneuvers. The best lineup in place, proper studio recordings, live work, signing with a label, refine, improve and continue to elevate your status up the ranks. German thrash band Eradicator have done this across Europe since their start in 2004 – releasing four albums to date on smaller domestic labels and organizing independent tours from 2014-2018 to gather a steady following. Moving up to Metalville for Influence Denied should allow these musicians a chance to gain more ground internationally – displaying a style that dips its toes in both domestic and Bay Area influences.

Requisite elements that are necessary for headbanging approval include solid rhythm guitar foundations, killer lead play, versatile bass/drum support that can change from blistering speed to mid-tempo groove capacities and engaging gang-like vocal support in key passages to bring these songs home. The crunchy meets melodic flow of “Echo Chamber” is an early favorite – the triplet accents and semi-marching transitions perfect for massive crowd launches into each other, while the instrumental lead harmonies contain a bit of Maiden-esque quality to an otherwise Heathen/Death Angel-esque affair. Drummer Jan-Peter Stöber obliterates his kit through fluid, precise hits and relentless adrenaline-fueled shifts during the title track – matching the fierce passion of guitarist Sebastian Stöber on vocals, which will remind many of John Connelly from Nuclear Assault. Tighter musical interplay between the quartet showcases their inherent knowledge of the genre plus years of seasoning at their respective instruments – Kreator and Destruction matter to Eradicator as much as any Bay Area influence, as the axe play and transitions during “Jackals to Chains” plus “Hypocrite” illustrate. Injecting producer Seeb Levermann from Orden Ogan into the fold ensures an up to date production that still displays the intricacies and heaviness that a thrash band should have – allowing the listener to absorb these songs from multiple angles.

Considering the last lineup change took place for the band in 2010, Eradicator is a lethal outfit ready to crawl into the hearts of more ardent thrash maniacs through Influence Denied. People into melodic power/thrash with superior riffing and solid individual songs will find plenty to treasure here.