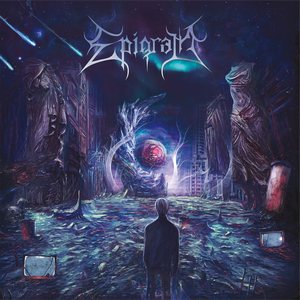 Another new entry into the symphonic death metal world, Epigram is a fresh act out of Los Angeles, California. Shadows is the band’s first release – a 6-song cut that stays on the shorter side of things, but understandably so. It is, after all, better to introduce yourself with a shorter release that leaves a feeling of yearning than to drop a bloated and overly long first impression.

Symphonic death metal is the most straight-forward description for Epigram, but they do manage to pull off a few surprises as well. For starters, the symphonic elements aren’t taking up too much of the scenery. They come out to the forefront when needed to enhance the song, but work just as well in the supporting role. Pleasing to hear a new act that doesn’t lean on them too much in that regard. It allows the heaviness to shine through instead. Speaking of which, while the band doesn’t take a Gothenburg-esque approach, it can be said that there is a melodic vibe to their material. From speed runs (“Darkness to Fear”) to slower, mid-tempo stuff (“Red Moon”), the band is never at a loss for melody, and it’s never done in a way that compromises the ‘metallic’ nature of the material. Whether the riffs or keys work alone, or together, there’s plenty to catch your ear in each track. And in getting back to the surprises, the final two songs work as to where the band could continue to evolve. The title track dives into some effective female cleans to accompany the usual rasp/roar combo, and “Delirium of the Frail” seems the most epic of the bunch with a dramatic intro that blends nicely into the heavy/melodic combo.

Shadows hits the right combination of brutality and melody for a symphonic death metal approach. Rare to see a first release with this much thought and polish in this regard, it bodes well to see where the band will turn to next, and Shadows itself a rather worthy first effort.