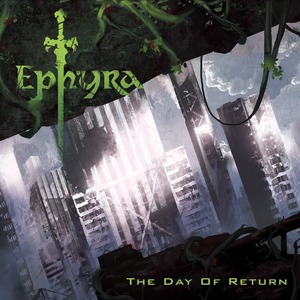 A band that has been sitting under the radar now for a few years, Ephyra are an Italian melodic death metal act with folk tendencies. The Day of Return is the band’s third release, and is the first for Volcano Records (their previous two were on Bakerteam Records). Ultimately, Ephyra goes for some more original territory at times, but it doesn’t end up too far outside the norm.

The Day of Return starts things off with plenty of heaviness as the title track begins. The band’s melodic death metal roots are quite clear, and one can easily pick up some of the Gothenburg scent to their riffing style and melodies. That distinctive thrashy gallop plays a major role in the attack. It’s not a bad thing at all, as the production does aid in allowing this to be a bit of a callback to the ‘golden age’ of the genre. Some folk elements permeate the music as well, from some outside instruments, as well as some clean female singing (which occasionally has a power metal vibe) in the more melodic moments. On the originality side, one thing that Ephyra does is to use some Eastern flair to their folk, which is quite evident in songs like “Your Sin” and “Sublime Visions.” It’s more subtle on other songs (“Being Human”), and makes one wish that they would incorporate more of this element in their music, as it does help them to stand out.

Some moments on The Day of Return seem stronger than others. When the band is fully incorporating the Eastern vibes in addition to their folky melodic death, it is quite effective. While the melodeath pieces aren’t the most innovative, they are enjoyable for those who like the sound. With some more individualization, Ephyra may very well be onto something in their future.