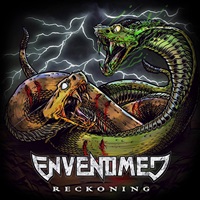 Capitalizing on the re-issue of their self-released debut album Evil Unseen through Punishment 18 Records last year, Australia’s Envenomed felt the need to issue an EP featuring one newer song and a re-recording of their early four song self-titled EP from 2009 given better recording and production values. Melodic thrash is the preference here, the riffing see-sawing between a lot of killer triplet runs and heads down crunchiness, the rhythm section quick to handle the drop on a dime transitions and plenty of gang vocal support beyond the normal singing.

Smartly opening with the latest Envenomed song “Reckoning” as the title track, the six minute plus offering has a monster mid-tempo transition two-thirds of the way through, allowing vocalist/guitarist Anthony Mavrikis to get into an interesting back and forth tennis match with the riffing template, clean nuances adding additional atmosphere and tension to the Heathen meets Metallica-like aura. The song also gains additional vocal support from In Malice’s Wake singer Shaun Farrugia (same surname to Envenomed second guitarist Brendan Farrugia, no family relation). Giving the older material a refresher due to the current lineup’s abilities and more experience at hand, the standouts include “Failure to Falter” that has a lot of older Ozzy meets Bay Area intonations, drummer Adam Bartleson giving his complete double bass kit a whirlwind workout and the burning hot twin guitar action for the mid-tempo anthem-oriented “In Sanity’s Stead”.

For a lot of these newer thrash bands, the vocals remain indistinguishable from group to group. Envenomed are one of the exceptions to the rule- Anthony’s delivery has a lot of proper power and sustained note propensities, bringing to mind Joey Belladonna of Anthrax. And what’s not to love about two snakes ready to strike for the cover? Australia is a current hotbed for metal talent these days – and Envenomed deserve a proper look based on Reckoning. More than the average meat and potatoes speed and dazzle show going on here- the musicianship pushes this band on par with some of the best in the business. 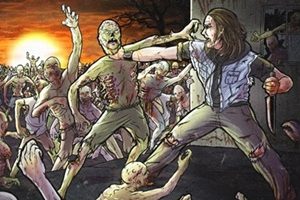