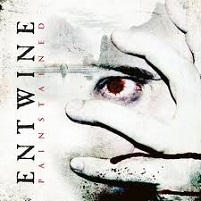 , a domicile that is usually not very forgiving of such meanderings. Then again, those luscious, seductive hooks and muscular riffs heard on jams like “Bitter Sweet” and “Still Remains” are simply too catchy to be ignored, thus warranting further investigation into Entwine’s catalog and future releases. Suffice it to say by the rating above, Painstained is a let down.

The Finns have opted for a more up-tempo, rock-based approach, which is understandable, but there is a dearth of hooks across the board. Opener “Soul Sacrifice” sounds forced, as does “Dying Moan” and neither of them have a chorus to go nuts for, which is practically Entwine’s calling card.

Singer Mika Tauriainen’s voice sits softly atop gentle, bobbing guitar work during “Beautifully Confined,” yet comes dangerously close to grazing the wasteland of modern rock radio on “Lost In My Denial,” a failed attempt at a commercial song that would best be suited for someone like Burn Halo

. Similar territory is tread on “Dead By Silence,” but this track has some redeeming qualities, in spite of Taurianen’s clichéd and hackneyed lyrics.

We’ll cut Entwine some slack, for they’ve been at the Goth metal game

for over a decade now and have exhausted practically every avenue possible on six albums and numerous EP’s. However, the fact of the matter is Painstained is a bust and is hopefully not indicative of things to come for one of Finland’s forerunners of all things dark, romantic and brooding.