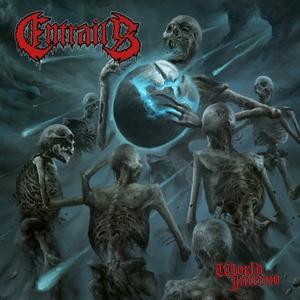 One’s enjoyment of Entrails does often depend upon your ability to listen to Entombed cloning. After all, Entrails (and countless others) has made a career out of aping just about everything they could from the band’s early years. So if you worship at the altar of Entombed, it’s clear you are ready for another helping of Entrails. But for the rest of us, is it really worth it?

After the uptick in energy in the band’s Obliteration effort, World Inferno is a resounding yes. For as much as we can simply rewrite Entombed over and over again in reference to this review, there’s still something quite compelling about World Inferno. It will come as little surprise that the band has done little to enhance the formula, but if it’s not broke, don’t fix it. Thick, raunchy HM-2 buzzing is readily apparent, but it’s the notion that the band follows it with a gleaming production that really gives them a cut above much of their competition. The excellent production really enhances the best parts of the band. The grooves (see “The Soul Collector”) have impressive weight to them, and the crisp sound allows you to discern the sly melodies (and some more obvious ones) with no difficulty. If there’s one song that feels slightly different than the others, it’s “Serial Murder (Death Squad),” which lovingly replaces some of the Entombed worship for that of At the Gates’ Slaughter of the Soul. Granted, it’s not a huge departure, but an enjoyable one, even if it comes across as around the same level of worship. Outside of that, it’s the expected high-octane Swe-death riffing that you’d expect to hear, with some occasional movements towards slower tempos and some death ‘n roll.

Is it the same ole, same ole that one has come to expect from Entrails? Absolutely, but World Inferno shows no signs of slowing down or getting stale. Energetic and catchy Swedish death metal done exactly the way you would like it. There’s something to be said for consistency after all.