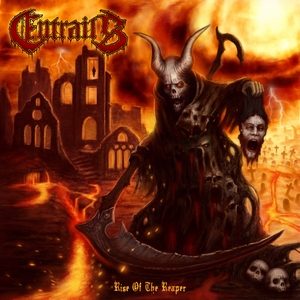 Continuing their pretty consistent run that began with Obliteration, Entrails is still raging in their Entombed/Dismember content. Their sixth album in fact, as the band has been righteously blazing away material for all of the soon-to-close decade. A clear case of ‘if you liked the band previously, feel free to check this out for some fresh riffs,’ but we’ll indulge and elaborate a bit further.

There’s not going to be much different to expect when it comes to a band like this. Playing a sound that is dated to begin with (a classic, one might say), there’s only so many ways that you can swing those buzzsaw HM-2 toned guitars before everything becomes old hat. But as mentioned before, Entrails themselves have been on the more enjoyable side of things for a few albums at this point (despite a bit of a sub-par beginning). The reason behind it is really simple – it’s fun! When it comes to old school Swe-death worship, one really needs to bring their A-game when it comes to the riffing onslaught. Those who simply want to homage the classics without putting some feeling into it are best to stay rotten in the soil. But Rise of the Reaper is full of flesh-ripping tracks like “For Whom the Head Rolls,” “For Hell,” and “Destination Death” for those who want some speed-riddled brutality with their HM-2 crunch. But the sound was built on groove, and mid-tempo stompers like “Crawl in Your Guts” and “Miscreation” provide an enjoyable romp for those interested in an extra dose of chunky riffage. They even provide an effectively doomy and melodic closer in “Cathedral of Pain” (let’s choose to ignore the unnecessary intro/outro combination).

Entrails continue to be a relevant old school Swedish death metal choice because they chock each album full of fun and entertaining riffs. It’s really all that separates each album from the last, but they are still pushing strong with some solid ones that maintain listener interest.