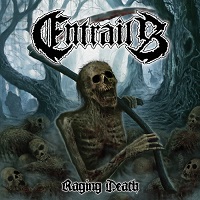 The story of Entrails is now a normal one. The Swedes formed in the early 90’s, but folded rather quickly, perhaps unable to stay in stride with the blossoming Entombed, Dismember, and Grave.  The old gang (read: guitarist Jimmy Lundqvist) got the itch again in 2008, slapped together a new incarnation of the band, secured a deal for the release of Tales From the Morgue in 2010, released the follow-up in the form of The Tomb Awaits in 2011, got picked up by Metal Blade last year, and here we are in 2013 with Raging Death. Being a Swedish death metal band is so easy.

To start, aping Entombed’s classic logo font was a really bad idea, giving headway as to how unoriginal Raging Death was probably going to sound. As expected, it’s a not-so fertile incarnation of Stockholm death metal, full of nearly every riff coupling, vocal manifestation, and production technique the scene has ever produced. At times, this scribe swore he could close his eyes and imagine the 500 similar bands doing the same exact thing, yet the magical ability of caffeine and the motivation to get Raging Death out of the review queue prevailed.

Not counting the mid-placed savagery of “Bloodhammer” and the eeriness of “Descend to the Beyond,” Raging Death has zero face-value and virtually no identity. It’s carbon-copy Swedish death metal at its worst. Can someone stop with this stuff?