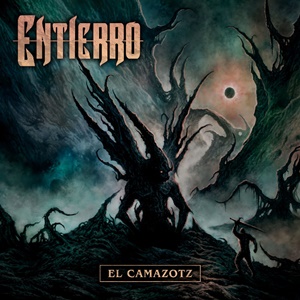 Named after the Mayan bat god associated with night, death, and sacrifice, El Camazotz is the five-song EP follow up to the 2018 self-titled album of Connecticut heavy metal band Entierro. Most will know a couple of the musicians associated with this group if you dig into the history of this genre – guitarist Victor Arduini an integral part of the early Fates Warning era, while vocalist/bassist Christopher Beaudette is a part of Jasta and NightBitch. The quartet aim to appease their classic metal tastes – infusing these tracks with a purity and heart that speaks to the late 70’s/ early 80’s movement of US and British influences – full of primal, driving riffs, solid grooves, and ideal melodies that are bluesy and emotional.

Gaining a couple more years experience chemistry-wise while also playing more gigs together, there’s a spirit in these tracks that straddles the line of driving stoner/doom with traditional/classic metal passages. The interplay between Arduini and second axeman Christopher Begnal aligns in a Thin Lizzy-esque tradeoff way during “The Past”, while assembling some hefty raucous mid-tempo rhythms that put fists in the air on the follow-up title track. Certain songs possess a looming despair that helped put Dio-era Black Sabbath or early Trouble on the map – the opener “The Penance” killer in that regard, with Christopher Beaudette’s voice titillating and teasing between his Glenn Danzig-fierce accents and a clear, heavy metal register, supplementing key transitions with his potent bass mechanics. Production work from Dave Kaminsky at Studio Wormwood allows the natural authenticity of the tones and performances to shine – twin guitar harmonies, energetic drumming, proper vocals and supplementary background support all garnering equal time and space in the mix. Outside of the four originals, the EP ends on a Judas Priest cover for “Call for the Priest” – a gem from 1977’s Sin After Sin, keeping the key trademarks, tight transitions, and dual guitar foundation plus soaring Halford-esque notes top of mind, while also making this an ideal Entierro interpretation to pull out on the regular live.

Entierro are an asset to the New England scene – keeping the old metal guard sound alive and hopefully turning on a new generation to bands that can be creative in this genre today. 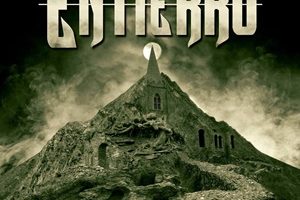