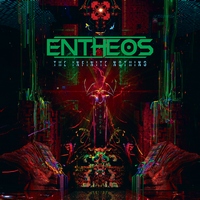 Entheos first foray, last year’s Primal EP, quickly stormed the metal scene and they took quick pace to jump aboard some tours and get their name out and about quick. It definitely helps when you are composed of top-notch talent like Navene Koperweis (ex-Animals as Leaders) and Evan Brewer (ex-The Faceless) championing the way, but it also means that the group has an even higher standard to look up to. The Infinite Nothing sets the bar rather high for a debut full-length.

Cutting right to the chase, some of the magic of The Infinite Nothing stems from its inability to be easily slated for classification. Sure, you can rattle off the elements of death metal, groove, and progressive tendencies pretty quickly, but it never allows itself to be placed into one box. There’s also some significant electronic elements (which are much darker in tone than the EP’s) if you want to lay it all out on the table. One thing that is easily classifiable is that The Infinite Nothing is its intensity. It doesn’t go 5,000mph at all times but the way that all of the elements come into play fully attempt to flatten the listener, while keeping their attention to the fullest. Just listen to the straight for the jugular attack of opening cut “Perpetual Miscalculations” if you need proof. Plenty of thick groove, interesting bass and drum lines, well-incorporated electronics and effects, Chaney Crabb’s downright brutal vocals, and a staggering solo all right in the first track. The riffs are frequently monstrous (courtesy of now-former axeman Frank Costa) and Malcolm Pugh’s solos are the dizzyingly killer ones we have come to expect from the man behind A Loathing Requiem/Inferi. Lastly, the way the electronic/industrial tones are added is just impressive – adding surprising depth and moving the songs in varied directions without getting too far in the way. The production really lets everyone have their moment in the spotlight.

The type of album that one could wax on about for an extended period and elaborate on each player, we’ll just leave it as you need to experience The Infinite Nothing for yourself. If you are a fan of any of these musicians, or metal that maintains a decidedly abrasive edge while drawing in plenty of outside-the-box thinking, Entheos will be your new favorite act. With this much progression and maturity in one year since an EP release, the possibilities are endless for what they can accomplish in their future. 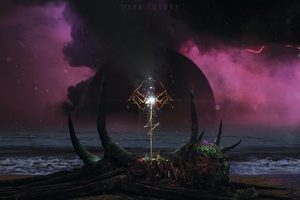