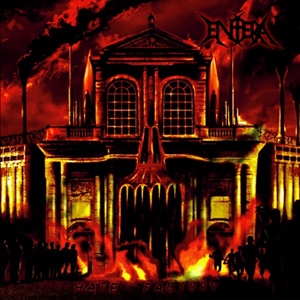 German melodic thrash trio Entera pump out some old school tracks on their fifth studio album Hate Factory. Starting out in 1990, they’ve had quite a few members through their thirty year history (including former or current musicians associated with Running Wild and Iron Angel) and been very sporadic with releases – often issuing shorter EP’s to lessen the gap between full offerings. You’ll get pretty quickly that this group prefer a shout-a-long style of vocals plus catchy riffing and bass lines that are upfront and equally important in sonic prominence – making this twelve-track outing fairly easy to process.

There’s a familiarity to a lot of the bass/guitar parts that dance against one another before heading into the main rhythms that contain a mix of Exodus-like fervor against a bit of Tankard or Nuclear Assault attack. Guitarist Iker Mayordomo has impressive tools of the trade, knowing when to keep things steady and tight while also executing the proper solo mechanics – check out his work in “Fake Persons” and “Playback” for some memorable, heads down axe antics. You’ll also get two versions in English and Spanish for “Pay to Play” (aka “Pagar Por Tocar”), with the adage ‘we don’t need distrust in metal’ reverberating for those all too familiar with this toxic concept plaguing the live scene. The lyrical content can be picked up just on song titles alone – “Getting Old Is Shit” and “Chatterbox” self-explanatory – and a lot of times the rhythmic, throaty vocal delivery of bassist Carsten Lutter has a touch of that crossover nature where you meld the much missed comedian Sam Kinison against Pro-Pain and Nuclear Assault.

Entera struggle to really be taken seriously against other old school thrash acts because of the poor drumming execution in spots that’s highly mechanical (“War of the Zombies” the biggest offender) and occasional variance in musical tones song to song – one minute the guitars are ripping, the next measure they sound like they were recorded through an old four-track in a distant cave. When the band choose to be a bit more mid-tempo in their choice of riffs and transitions, you get a standout cut like “I Just Can’t Hear It Anymore” – but those moments are few and far between. Another case where ardent, cult-purists may dig Entera, but this scribe doubts more than the legions in their local German stomping grounds will find enough within Hate Factory to champion against bigger (or younger) acts.