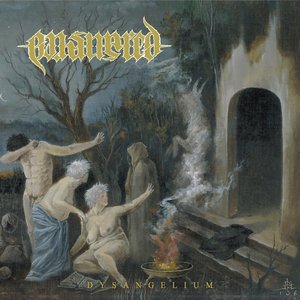 Despite showing over ten years in existence (some of which being called Gravehammer), Dysangelium marks Ensnared’s first full-length effort, following a demo and 2013’s Ravenous Damnation’s Dawn. Given the band’s geography being that of Gothenburg, Sweden, you’d be forgiven to assume that this is yet another example of old school Swedish death metal. You would be half-right though.

Ensnared may not bust out the HM-2 pedal, but they do still worship in the old school. However, they choose a more pure pathway, and throw in shades of both thrash influences and odd psychedelia as Dysangelium unfolds. They also engage in a practice that seems to be emerging more as of late – that of tossing in interludes after each song. Upon first glance it would appear that these would mark the bane of the album’s existence, but each one is distinctive and adds a breath of fresh air to the otherwise “norms” that the other tracks revel in. There’s eerie and foreboding (“Interlude III”) to somber and melodic (“Interlude V”) to straight heavy (“Interlude I”). The songs themselves don’t veer too far off the beaten path from what you’d expect, though the thrash influences give them a bit more energy on occasion (“Gale of Maskim”). But the formula starts to feel a bit commonplace by the midway point on the album, particularly in the one-dimensional vocal presence and stretching tracks to the six minute mark.

The frequent dips into more atmospheric and mood-setting Interludes keep Ensnared above water, but one has to wonder what the effect would be if they incorporated this same feeling into each track as a whole. Longer song lengths for this style could easily be justified if those moods were successfully employed. But for now, Dysangelium feels more like an “eh, it’s ok” type album rather than one that revels in greatness.