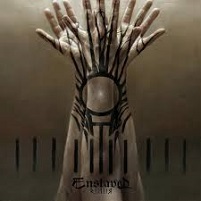 Opening up the autumn season in grand fashion, a deluge of fantastic releases are upon us and spearheading that charge is veteran progressive black/Viking metal titans Enslaved and their newest and likely earthiest opusRIITIIR. Continuing along the long and illustrious progressive path the band first started drifting toward with 2000’s Mardraum: Beyond The Within. But if 2010’sAxioma Ethica Odini was a return of punishing metal authority, RIITIIR is an exercise in extremes and bombast – everything here is enormous in scale and execution. The songs themselves (most shooting well beyond the eight minute mark) each featuring a myriad of movements and cascading motifs, everything the Enslaved fan loves about the band here and in grand style!

Glacial sheets of guitar are par the course for RIITIIR, the opening salvo of “Thoughts Like Hammers” steamrolling right out of the gate, near equal play of harsh and clean vocals coming into play with time, threatening and soothing in equal measure. These peaks and valleys return in epic fashion on “Veilburner,” trade-offs and synchrony of the two ends being used to tremendous effect, the cleans in particular used better here than on any release since Herbrand Larsen joined the group in 2004. This clean expression comes through in grand fashion on 11 minute closer “Forsaken,” a decidedly low key but super effective end to the journeys the album takes.

It isn’t all clean wailing and atmospheric pomp however, the band lovingly riffing out with rediscovered metallic bravado with “Roots of the Mountain” and “Storm of Memories.” Though the harsh cliffs at the outset are soon met with clean voiced and mellotron-drenched ridgetops, eventually the listener is firmly kicked back into the abyss, this time accompanied by some fantastic and ongoing solos. It’s fascinating to see the rediscovered metallic vigor that came to life on the last release mixed so fervently with the band’s ever-growing melodic sense and expressive voice. These two aspects of the band, combined with their increasingly complex compositional sense, make for an exhausting and enthralling journey.

All that being said, what’s featured on RIITIIR won’t come as a surprise to anyone who’s listened to the band for even the past couple years, let alone the last decade – the album is simply another notch along the belt of progression by degrees. The compositions are bigger, more ornate, bristling with finer features and bombast. It’s the band’s thickest release in a long line of releases guitar Ivar Bjørnson has joked are ‘all two weeks long’. With each of those releases however the joy lay in divining the details over repeat listens, unearthing the secrets between the out layers. That remains the case here, RIITIIR another fantastic from a band that burst past the 20-year mark and is showing zero signs of aging.