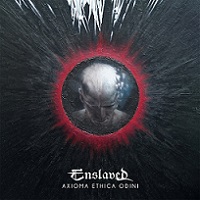 Going heavier after 2008’s very progressive, Pink Floyd-intensive Vertebrae was easily the smartest move Enslaved could have made. Then again, the band have been all about making smart decisions for the last decade or so, going back to when they ditched Viking metal altogether. Axioma Ethica Odini is evidence as to how self-aware and forward thinking the Norwegians are – it’s almost as savory as its predecessor, yet at the same time, indicative that the band practically foams at the mouth to move forward.

One will instantly notice the preponderance of clean vocals courtesy of keyboardist Hebrand Larson, and they are as well-timed as they are effective, augmenting songs like opener “Ethica Odini” and “Waruun.” In fact, Larson overshadows bassist/co-vocalist Grutle Kjellson to staggering effect at times, just reference the climatic “Giants.”

The brutal edge that was most prominent around the dawn of the last decade (i.e. 2000’s Beyond the Within) is rearing its ugly head on early favorite “Raidho,” a song that is enveloped by guitarist/mainman Ivar Bjornson’s odd chord usage. Still, the atmospheric/misty vibe that has been so prevalent since 2004’s Isa is arguably the foundation here – it’s the anchor for “Singular,” and the dangling carrot for album closer “Lightening,” a song that sees Enslaved reach back into the simple, yet multi-faceted realm of Vertebrae.

Rare when a band so late into its career (their 20th anniversary is next year) is so vital and hungry. In the world of Enslaved, there’s little time to rest on one’s laurels – it’s either get on board or the get the hell out of the way. Best part is that albums like Axioma Ethica Odini are the bodies of work that will be the ones people remember the band by, probably moreso than their ballyhooed Viking metal days.