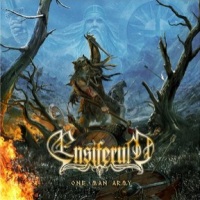 Finnish folk metal warriors Ensiferum have always been known for their melodic death-tinged Viking metal anthems; that is until 2012’s Unsung Heroes was released. The band’s fifth studio album was much maligned by fans who felt the band lost its way, dialing back the aggression of its signature break-neck guitar riffs, blasting drum beats and galloping bass lines in favor of slower-paced songs with more folk elements and operatic female backing vocals. For those who feared the band’s glory days may be behind them, rest assured the band has returned with a renewed vigor and enthusiasm on One Man Army.

Following the instrumental intro “March of War,” the fast-paced “Axe of Judgment” screams out of the gates with Janne Parviainen’s rapid fire drum blasts and guitarist/lead singer Petri Lindroos in full-on death growl, signaling the band is back with a vengeance. Lead guitarist Markus Toivonen’s speedy riffs drive the song, which sees backing gang-shouted vocals trading off with Lindroos in the chorus. Settling into a mid-paced gallop in the mid-section, the song also features backing choir vocals, an element used throughout the album to great effect.

While signature folk elements permeate the album, such as acoustic guitars, flute, violins, and the clean backing vocals of Toivonen and bassist Sami Hinkka, the melodic death metal edge prevalent on their early albums is the dominant force here. Whether it’s the intense hammering of title track “One Man Army,” in which fans will raise fists and horns in unison in the live setting, or the fiery “Two of Spades,” which settles into an up-tempo humppa rhythm complete with quick claps, the band uses everything at its disposal to craft energetic, memorable songs that will stay with the listener long after the record stops spinning. “Warrior Without A War” and the mid-paced “Heathen Horde” boast extremely catchy choruses while balancing Lindroos’ barks and backing choir vocals/chants.

“Cry for the Earth Bounds” is one of the more unique tracks on the album, beginning with male choir chants and prominently featuring Emmi Silvennoinen’s keyboard playing as well as clean female vocals trading off amongst male choir vocals and Lindroos over another galloping riff and dark tones. At 11:20, “Descendants, Defiance, Domination” could have closed out the album in epic fashion, featuring a haunting Moonsorrow guitar intro, galloping rhythms, a thrashing folk melody and guest vocals from Tyr’s Heri Joensen, but the band instead went with the playful slide guitar and train-track feel of “Neito Pohjolan.” It doesn’t detract from the quality of the album, but sounds more like a bonus track that would better fit in with the band’s rendition of “Rawhide” or the aptly named goofy yet hilarious “Bonus Song.”

With One Man Army, Ensiferum have regained their rightful place atop the folk metal genre. Heathen warriors can once again ride confidently into battle (with gods by their side), mead horns held high.