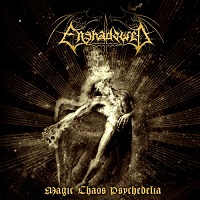 Well, so much for being exotic. Greek metal bands have come to perfect the difficult union of extreme metal and exotic elements. Look no further than the main triumphs of Rotting Christ and Septicflesh for evidence – these two bands do it about as good as anybody (listen to Thy Mighty Contract and Communion for proof). That’s probably why Enshadowed’s Magic Chaos Psychedelia comes across with so much blunt force. There are no triumphant interludes, or tantalizing orchestra breaks, just full-on extreme death/black metal.

The band is returning after nine-year break and probably discovering what so many other once-dormant bands do – the extreme metal scene has effectively cannibalized itself. Therefore, the ideas hauled out here tend to cover the field roamed by Behemoth, Hate, and Belphegor, three bands that are the pure definition of death/black metal. Enshadowed don’t have the same terrorizing riff-style as the above trio, but they sure know how to get down during the grinding, pick-sliding portions heard on “Inner Psy-Trip.” It’s one of the few songs here with any room for air…the rest of the album essentially is reaching for the jugular non-stop.

Magic Chaos Psychedelia may not have the nerve or fuck-all attitude of the recent output from Hate or Belphegor, nor does it parlay its geographical locale into a like-minded Greek metal release, so that in itself, is a success on some level.