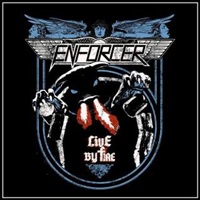 Torchbearers for the newer generation of heavy/speed metal, Enforcer in little over a decade has ascended to headlining status across the globe. After a series of successful studio recordings, its prime time that these Swedes document their stage abilities through Live by Fire, a DVD/CD package of two different shows from their 2013 touring excursions through Japan and Greece. Tacked on as an extra enticement the band recorded two new tracks plus a cover of “Tyrants of Our Generation” from the rather obscure 80’s New York band Frigid Bich.

Only privy to the audio files of the Greece show, the fifteen songs encompass the power and glory of Enforcer’s strengths – easily retained choruses to scream and shout in unison with the band, bass and guitar play that rivals the best of NWOBHM meets US 80’s acts like Jag Panzer and Liege Lord as well as the right mix of mid-tempo anthems and faster barnstormers that provide rocket fuel to the listeners. Unafraid to incorporate an instrumental that elicits equal audience sing-a-long fervor to the Maiden/Rush capacity through “Crystal Suite”, the set list will not disappoint those who love speedier numbers such as “Scream of the Savage” and “Take Me to Hell” while also keeping the anthem quotient on high through “Midnight Vice” and “Katana”.

Guitarist/ vocalist Olof Wikstrand has all the arena stage patter tricks down, a stew of Ozzy-oriented screams and power unity work – while his fellow axe slinger Joseph Tholl teams up for a flurry of twin harmonies. By the time the set concludes with “Evil Attacker”, Enforcer bathes in the deserved accolades for their no holds barred performance. As for the studio cuts – “Speak the Tongue of the Heathen Gods” is an interesting departure through its piano intro and more commercial leaning chord/melody combinations, while “Stellar Plains” is a dynamic effort that wavers between familiar gallops and more brooding Priest-like rhythms, and maybe Enforcer’s desire to push an obscure cover like the aforementioned “Tyrants of Our Generation” could see more ardent people look into Frigid Bich, as the band definitely put more of an early Metallica slant on the arrangement.

Setting sights on North America for two months in early 2016 for the first time since their debut album, Enforcer wield instruments and tools of steel for the speed/traditional metal scene’s long term survival – Live by Fire equivalent to this journalist’s Live after Death experience.