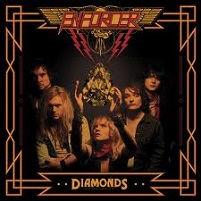 In the current metal market model, does any sub-genre really ever burn out or fade away? What becomes new usually means a return to the old, only with a change in the age of the players as well as taking advantage of the power of promotion at your own personal keyboard fingertips.

So don’t blame Sweden’s Enforcer for blatantly taking the early Paul Di’Anno / Iron Maiden springboard, looking at what Wolf have done with their career and then just cranking their amps to 11 on their second album, Diamonds to melt every heathen in their path. The opening guitar salvo and drum rolls within “Midnight Vice” are of the same mold as “The Ides of March,” and then the passionate high-energy singing from Olof Wikstrand spontaneously goes from NWOBHM/speed metal roars to scat parts at the drop of a measure.

“Roll the Dice” within 3:12 gives the axe team Adam Zaars and Joseph Tholl a chance to flex all their riffs, solos and harmony techniques much like the masters of the past. “Katana” the follow up takes you through the normal atmospheric Harris-like rhythm time signatures in its six minutes timeframe, the chorus a battle cry as one again the guitars just fire with the exuberance of 1980-1982 Euro-metal all over again.

The title track in fact is an instrumental, one where each musician gains a chance to show off a little of their skill set and proves that bassist Tobias Lindqvist and drummer Jonas Wikstrand aren’t relegated to simple 4/4 bottom end grooves. “Live For the Night” should set alight all of the John Cyriis/Agent Steel followers, a speed demon track with leather lung vocal melodies to match.

In less than 40, minutes Enforcer place themselves light years beyond others in this NWOTHM movement, and I wouldn’t be surprised if they make a major league move much like Wolf did after their second album.